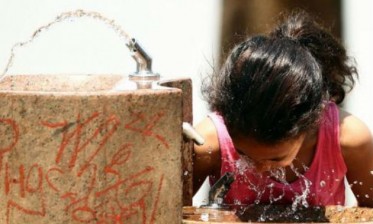 SAO PAULO - The engineer Pedro Ricardo Paulino has developed a machine capable of generating 5000 liters of drinking water per day through a process of high efficiency condensation that can capture the moisture in the air and undergo a purifying plants process for consumption human.

Specializing in mechatronics, Paulino is the creator of the machine "Wateair", a portmanteau of the words in English "water" (water) and "air" (air), and since 2010 has sold 200 units of equipment, which has gained prominence in recent weeks due the crisis of water shortage in São Paulo.

"All that the machine needs to work is a source of electricity and air humidity exceeding 10% (minimum recommended by the World Health Organization, WHO)," said Paulino in an interview with Efe.

According to engineer this technology absorbs moisture in the air due to a "high efficiency equipment"; condenses and filters the water, and in the last step, the liquid goes through a process to be made safe in which it receives calcium, magnesium, potassium and silicon.

"It makes no difference if the environment is polluted or not since the water vapor are not solid particles," he added the engineer, who assured to have invested about $ 1 million of his own money in the last four years to develop the device.

The invention is offered in two versions: one capable of producing 15 liters per day, the size of the typical water filters for office, and one able to generate five thousand liters per day.

"Before, customers were schools or people who needed drinking water less. Now, we sell our machines to restaurants and pharmacies, for example. There is a wide variety of customers, "he said. According to its inventor, the most basic version costs US$ 2.000 and the most expensive R $ US$ 300.000.

"One of our challenges is to reduce costs. We are working to improve the efficiency of our equipment and energy efficiency. Another problem we have is importing parts. We have to bring them from eight different countries and this also influences the price, "he said.

According to Paulino, the price of a liter of water produced with your machine is US$ 0.01. This value implies that produce a cubic meter of water with the machine costs US$ 10.00, while the Basic Sanitation Company of the State of São Paulo (Sabesp) provides the same volume of US$ 6.00.

According to the 2014 edition of the Risk Report of the World Economic Forum, water is the third biggest problem in the world after the fiscal crisis in major economies and high levels of unemployment and underemployment.

According to a study presented this year by the UN on water resources in the world, about 768 million people do not have access to a good source of water supply - one that properly protects the water from outside contamination. The same report also predicts that the global need for water (in terms of extraction) will grow 55% by 2050, due to increased production demand (400%), thermal power generation (140%) and domestic consumption (130%) .

Also according to these estimates, more than 40% of the global population will live in regions with severe water problems.

Paulino ensures that his invention can solve these problems if combined with methods used today.

The engineer has received, including an order from a Middle Eastern country to implement this system as a substitute for turbine desalination. The idea is to use it as an experiment to test a larger version of its invention, able to generate "millions" of gallons of water.